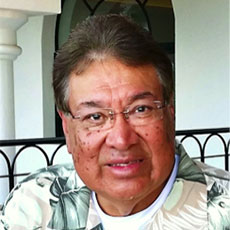 Mr. Herrera, Jr. is a Managing Director with Core Venture Partners, LLC. focused on technology infrastructure and renewable energy. Mr. Herrera is a Native American from the Cochiti and Laguna Pueblos of New Mexico. His background is unique in that both his grandmother, Tonita Pena, and father, Joe H. Herrera of Cochiti Pueblo are world renown artists, with their paintings hanging in many museums and private collections around the world.

Mr. Herrera has over 45 years working with such leading technology companies as Honeywell, Landis & GYR (now Siemens), Johnson Controls and Integrated Control Systems.  Throughout his career he focused on environmental control systems (commercial HVAC) in local sales, sales management and national sales management. He attended the University of Colorado and National Louis University and attained degrees in Economics and Business.

Mr. Herrera has joined Core Venture Partners to lead the mission of helping Native American Nations in the United States to become job creators, self-sustaining in energy, and responsive to the health and safety needs of their communities, especially during the COVID pandemic that has hurt many of the reservations across the nation.

Mr. Herrera was ordained a deacon in the Roman Catholic faith by the Archdiocese of Santa Fe in New Mexico in 2004. Since moving to Peoria, AZ he is serving at a local parish in the Diocese of Phoenix.  He is married to Dr. Dolores D. Sokol, PhD.